Events on The Nemesis: much more than just a live stream

The Nemesis virtual worlds can host fantastic live streams. The content of the speakers and performers stands out in a suggestive 3d scene and users are actively involved: they interact with the space and with other avatars, play and have fun. 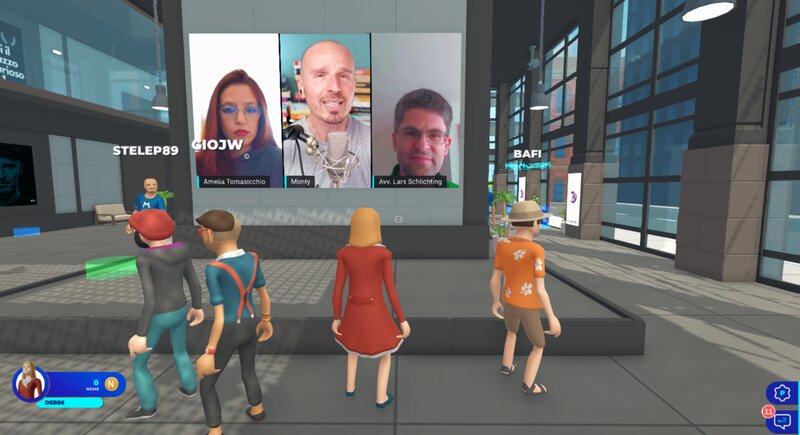 The Nemesis has numerous live streaming events with ever-increasing results in terms of registering new users and participating in the community.

Why are live shows on The Nemesis so popular?

First of all, it is a formula that has not yet been tested so much: novelties always have a great attraction and people are curious to find out what awaits them. The Nemesis team periodically releases new features and it is surprising to see that, event after event, users experience them with interest.

In the beginning, many enjoyed having their avatar sit in a front row seat - and there are those who enter into the virtual theater first on purpose! - or take a selfie during the live. Now that you can dance, clap, and interact with others on multiple levels, the engagement is at the top.

Speaking of engagement, gamification is the second winning element: The Nemesis virtual worlds are basically game scenarios where users can compete and win prizes.
The treasure hunt launched during Marcondiro's live musical performance is proof of this: everyone was looking for the chests scattered on the Caribbean island that hosted the event, looking for the prize up for grabs from the band.
There are different gameplay, it only depends on the type of event: during the Marco Montemagno Vernissage, in his virtual gallery on The Nemesis, Monty's avatar invited the participants to get involved with a themed quiz, to win a limited edition card to be used in the future... to play, challenge or trade inventory items.

Whether it's live concerts streamed on a giant screen positioned in front of a beach or a virtual art gallery vernissage where digital artists can exhibit their artwork and bring new collectors directly to the markets to buy the related NFT, this mode has great, huge potential.

And not only in the artistic, creative and playful fields.

Influencers and professionals can engage their fan base with interviews and talk shows broadcast within a conference room or in a theater or cinema style ambience. One of our most followed live shows, for example, saw protagonists such as Andrea Concas, Ivan Quaroni, Chiara Canali and Amelia Tomasicchio who started a critical educational debate.

Brands and companies can use new tools for their marketing initiatives, to engage and retain their customers with thematic challenges and to have new useful content to feed communities and social networks. Soon there will be more and more events sponsored by companies that, within their virtual stores, will invite users to play with the brand to win great prizes.

In the real world these initiatives have always worked, just think of Red Bull's activities. There will also be The Nemesis, with its augmented reality gameplay.

In the virtual world, these initiatives will take hold more and more. And The Nemesis has already taken part in this phenomenon, which will soon become mass.

Avatar mania with The Nemesis and Ready Player Me

Have you already played RC-NITRO game?

The Nemesis partners with LandVault